Well, as is typical with diets - I fell off the wagon. Put most of the weight back on. Just couldn't face another green drink!

I have taken a break from the diaconate program since it moved 300k away.

I've changed my MTS final paper from diakonia in the writings of Francis to New Evangelization and Youth.

I've basically given up on CAF Catholic answers and rarely go there, never mind post. I tend to spend time on the Grauniad (Guardian) commenting on articles from a catholic point of view which upsets it's mainly middle class leftist/elitist atheist members.

And I've swapped my Bonnie for a Tiger 955i!

I'm sure God is speaking in all this.
Posted by Triumphguy at 22:51 No comments:

My weight loss so far!

I need to check my diet, because when I started I felt full of energy, now I'm dragging my butt.... and I'm down with a bad head cold and sore throat.

Maybe it;s just because I'm under the weather.
Posted by Triumphguy at 21:51 No comments:

Got a bit lazy

I've gone up a pound and a half in the last couple of days.

I'm trying to figure out why.

Well I know why - I shared 2 bottles of wine this week with my wife, and I also ate too many carbs in the last couple of days.

I need to get back on the veggies slushies!
Posted by Triumphguy at 09:25 No comments:

So I'm enjoying the feeling of relative freedom of movement and lightness.

And what a difference nearly 20lbs makes!

I'm going up stairs easier - I even caught my self taking 2 steps at a time today without thinking!  I used to be very active, but I've suffered from strained Achilles and plantar fasciitis problems for a few years - all due to weight related stress on my feet I have no doubt. My usual walking mode has been a slow hobble when injured, and a cautious stride when uninjured.
Posted by Triumphguy at 17:09 No comments:

Dropping meat gives me an excuse to learn a bunch more about food and food prep.

A year ago I got into bread making, vegetable growing and slow cooking. I even built a chicken coop to grow heritage breeds for their eggs (except the city passed an ordinance outlawing chickens!).

So I've been evolving in my food "journey."  However, I enjoyed my food more, but wasn't getting any healthier.

Then my riding buddy had a triple by pass, my father in law died of esophageal cancer, and I realized that I was literally a "cheeseburger away from a heart-attack."  But I didn't know what to do about it.

The only vegan I know is a hypochondriac, negative, anti-social person and I've gotten used to arguing against her point of view, and I'm shocked to find that her information may have been right, even if her methods got up my nose.

So, one night during the Christmas season, suffering from what they called in Dickens' time a "bilious attack" I decided to change my life.... and I'm loving it!

And I'm looking forward to new recipes, tastes and textures.
Posted by Triumphguy at 20:03 No comments:

What have I learned so far?

1. I feel better on this diet. I'm no longer so sluggish in the mornings.  I seem to be sleeping better. There's no heartburn or hemorrhoids. I don't feel so stretched and bloated.  I seem to have more energy.

2. It does take more effort and conscious thought to prepare my food.  But I'm AM taking the time and effort and it doesn't seem too burdensome.

3. I do get sick of drinking stuff that looks like it's been hosed off the underside of my lawn mower! 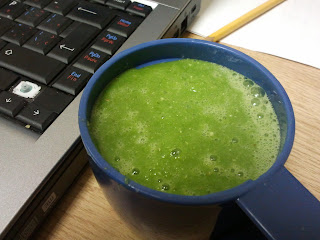 However, a little ginger, paprika, garlic etc helps spice it up. In my opinion DON'T put turmeric in it.  It's far too bitter.  I love it in curries, but not my green sludge drinks!

4. I'm losing weight. It was faster at first, but it's still happening.

5. I'm not going to focus on losing weight. There's a ton of other bonuses to changing my diet and weight is just the natural conclusion.

6. Two "movies" moved me. "Fat, Sick and Nearly Dead," and "Forks Over Knives."  FSND was a personal account of an obese millionaire businessman and a morbidly obese trucker he meets in Winslow Arizona and subsequently helps.  Both their lives change, but the truckers change was far more moving, since he was just an ordinary guy suffering (literally) under a heavy load, and a burden of sickness and depression.

The second movie, Forks Over Knives wasn't as moving, but was a very convincing documentary on the underpinnings of the whole food revolution. Very convincing - and made me angry.

I was actually angry at both sides of the debate.  The veggies for their tactics which have often failed to convince me in the past, and which have just as often turned me away; and the food industry for perpetuating a sick diet.  I should have known this stuff 50 lbs ago, when I was only 30 lbs overweight!

7. I know I want my kids to benefit from my knowledge. Our families diet is about to change radically. We love ham and bean soups, slow cooked stews, roast lamb, roast chicken, and home made pizza so that's going to be sad -really sad.  So we're going to have to learn some new favourites!

8. Finally - for now! I know I can do this.  I can go from a high of 326 to 210 lbs! I can do it and I can live longer, happier and healthier.  I'm already planning birthday and Christmas menus so that our family can feast  without feeling they have given anything up.
Posted by Triumphguy at 12:59 No comments:

St. Porphyry of Gaza - Saint of the Day - Americ